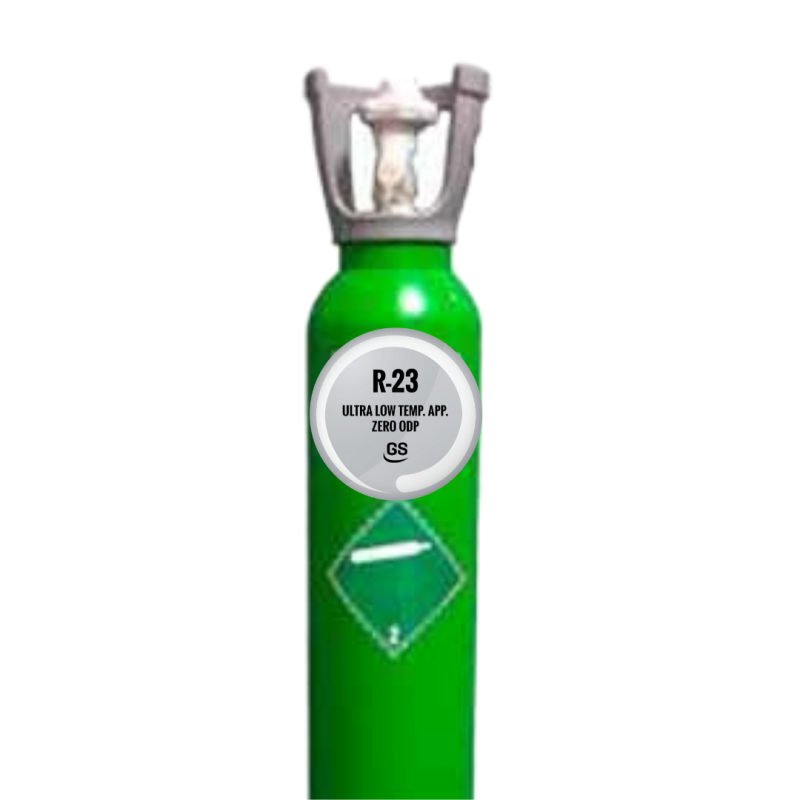 R-23 is an azeotropic HFC refrigerant with zero ozone depletion used in new equipment operating at very low temperatures (around -60 to -100 ° C). It is also an indirect replacement (retrofit) for R-13 and R-503.

· Equipment can be refilled in case of leakage.

· Refrigerating capacity higher than R-13 and lower than R-503.

· The reason why R-23 has a lower cooling capacity than R-503 is due to the increase in suction pressure and the molecular weight of R-503 compared to R-23.

· When designing a new equipment or for a retrofit, it must be taken into account that the compression ratio of R-23 is higher than that of R-13 and R-508.

· It may be necessary to adjust the expansion valve in a retrofit from R-503 to R-23 due to the high vapor pressures of R-503. It is not necessary to retrofit the R-13. Why do we charge the R-23 using static pressure? Because R-23 has a lower saturated vapor density than R-503 and R-13, retrofits with R-23 can lead to higher static pressures. In the event that the unit heats up to room temperature in case of system shutdown, it may cause the presence of liquid at higher temperatures than R-13 and R-503, having the same refrigerant charge. Since the vapor pressure of the liquid increases more rapidly with temperature than the pressure exerted by the expansion of the gas, the static pressure of R-23 will be greater than that of R-13 and R-503 using the same charge and volume of the system.

Any cookies that may not be particularly necessary for the website to function and is used specifically to collect user personal data via analytics, ads, other embedded contents are termed as non-necessary cookies. It is mandatory to procure user consent prior to running these cookies on your website.